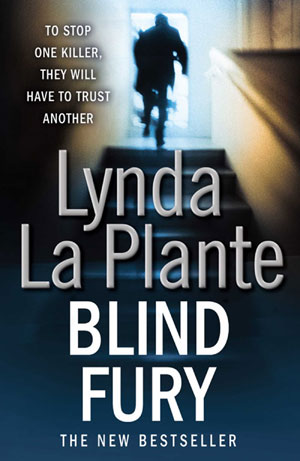 ‘An edge-of-seat, nail-biting thriller of the best kind!’

Close to a motorway service station, the body of a young woman is discovered. She appears to have no family, no friends, no one to identify her.

DI Anna Travis is brought onto the team of investigators by DCS James Langton, who already suspects that this recent case could be linked to two unsolved murders. As more evidence is discovered the team realize that they are contending with a triple murder investigation – and no suspect.

Anna’s blood runs cold when she receives a letter from a murderer she helped to arrest. He makes contact from prison insisting that he can track down their killer, but he will only talk to Anna.

Does he really have insight into the other killer’s mind, or is he merely intent on getting into hers?

Buy the paperback of Blind Fury

Buy the hardcover of Blind Fury

Buy the ebook of Blind Fury

This reading group guide for Blind Fury includes an introduction, discussion questions, ideas for enhancing your book club, and a Q&A (below) with author Lynda La Plante. The suggested questions are intended to help your reading group find new and interesting angles and topics for your discussion. We hope that these ideas will enrich your conversation and increase your enjoyment of the book.

Detective Inspector Anna Travis is nothing if not ‘the job’. Spending her days either performing enquiries or brainstorming in the incident room, and her nights are spent poring over case files, her total focus is on solving crimes. When a young, unidentified woman is found raped and murdered, Anna finds herself being drawn even deeper into a case than ever before. Not only does it link to three other unsolved murders, but a vicious killer who Anna put behind bars is back on her radar, claiming to be able to help solve the crime. As her visits to the prison turn personal, Anna is suddenly torn between her burgeoning feelings for one particular security guard, her determination to catch the killer, and the job she’s always put before anything else. Her clashing emotions just might prove deadly.

1. Describe Anna’s role in the PI department. How is she treated differently than her male counterparts throughout the story? Discuss examples and the possible implications of each scenario.

2. When Anna receives the letter from Cameron Welsh offering to help with the investigation, she wavers about whether or not to ignore the note. What would you have done in Anna’s position? Why?

3. What kind of message do you think the author is sending with her detailed accounts of the well-equipped and accommodating prison where Cameron Welsh is held? What is your personal stance on the controversial issue of rehabilitation programs at prisons?

4. When Detective Chief Superintendent James Langton agrees to send Anna to meet with Cameron Welsh, he makes the choice to trust a once very dangerous man. What do you think of his decision to use serial killers to help solve a murder case? Should criminals like Cameron Welsh ever be trusted again?

5. Anna’s work has always been her top priority. Her personal relationships, hobbies, and even her health can fall by the wayside. Discuss the importance of a work-life balance and how it affects Anna throughout the story. What was your reaction when she came full-circle back to ‘the job’?

6. When Anna speaks with Eric Potts, Margaret’s brother-in-law, he tells her that Margaret’s husband frequently abused her. He says, ‘Despite [it all], I never saw her cry – she was a bloody punching bag and yet she didn’t cry.’ What is the significance of this observation? What does this reaction tell you about Margaret’s personality?

7. Police and private investigators must often rely on instinct to solve a case, just as Anna and Langton do in Blind Fury. What are the possible ramifications of trusting one’s gut in regard to a murder investigation? Is it a liability or an essential aspect of the job? Has there ever been a time in your life when you acted on instinct? What was the result?

8. Throughout the story, the investigators are fighting against time to solve the murders. Do you feel that old cases should be closed when they run cold? Why or why not? When do you think it’s appropriate to give up on solving a serious crime?

9. When Anna uncovers the blue blanket, she subconsciously suspects Ken of being involved in the murders. She does so again later when she sees the photo of him with his coworker and his guard dog. Do you think Ken’s reaction to her suspicion is justified? Why or why not?

10. Anna frequently interviews people about events that took place years in the past, often pushing them to remember. What are the pros and cons of this kind of proactive approach to such enquiries?

11. When Anna first falls for Ken, the reader is told that she ‘was different, she was more confident in herself because of her relationship’. Later, Anna is described as wanting ‘whatever made him happy’. In what ways do these two details effect your understanding of their relationship? Have you ever been in a similar situation?

12. Gender roles and expectations play a large role in the narrative of Blind Fury. In what way do La Plante’s comments appear feminist and in what ways are they anti-feminist? How do you react to the way women and men are portrayed?

13. John Smiley is accused of murder on four counts. Do you think the police had enough evidence on Smiley to make an allegation fairly prior to his confession? Why? Given the frequency of falsely accused criminals, what would you do if you were in the detectives’ shoes?

14. Late in the story, Anna comments on preferring to be assigned to the rape and murder case of four young women, rather than to a child murder, because child cases are ‘hard not to get emotionally involved in’. What does this preference say about Anna’s character? How does this case change her perspective?

15. When personal tragedy hits Anna, Langton encourages her to take time to deal with her grief. Instead, Anna wants to throw herself back into work. How do you handle a distressing or traumatic situation? What advice might you have given Anna?

1. Blind Fury takes place in and around London. Give your book club some British flair by serving tea and other traditional English goodies at your next meeting.

2. Anna’s – and the other detectives’ – appearance and personal styles aren’t clearly illustrated, leaving her image up to the reader’s imagination. Ask each of your book club members to dress up like one of the characters. Then go around the room and explain your costume choices.