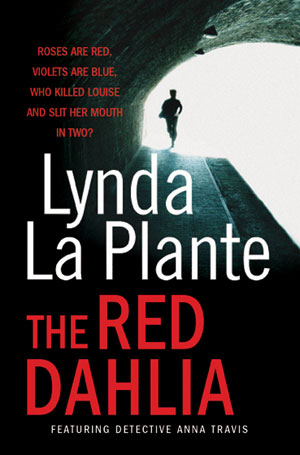 ‘The suspense continues to build right up to the end’

Anna Travis and James Langton return, and must work together to capture one of the most terrifying killers they have ever encountered.

A young girl is found dumped on the banks of the Thames. Horrifically mutilated and drained of blood, her death is an ominous mirror image of an unsolved 1940s case in Los Angeles known as ‘The Black Dahlia’. Detective Inspector Anna Travis must race against time to catch this copycat killer, dubbed ‘The Red Dahlia’ from the flower his victim wore in her hair.

But there are no suspects and a media frenzy is spiralling out of control.

Anna turns to her mentor, the volatile Detective Chief Inspector James Langton, but the frictions of their romantic relationship are complicating the case.

As Anna and Langton close in on the prime suspect, they uncover a shocking web of sadistic sexual evil – and a family’s murderous secrets…

Buy the paperback of The Red Dahlia

Buy the ebook of The Red Dahlia

This reading group guide for The Red Dahlia includes an introduction, discussion questions, and ideas for enhancing your book club. The suggested questions are intended to help your reading group find new and interesting angles and topics for your discussion. We hope that these ideas will enrich your conversation and increase your enjoyment of the book.

Newly promoted Detective Inspector Anna Travis teams up with Detective Inspector James Langton again to investigate a grisly murder, whose victim the press dubs the Red Dahlia. When the Red Dahlia murder appears to bear more than a passing resemblance to the famed Black Dahlia murder of 1947, whose killer was never found, the pressure to find the murderer intensifies and raises the stakes for Anna and James. As the two follow the trail of a suspect who leads them through an increasingly dark and sadistic world, James and Anna must fight their growing sexual attraction in order to bring the murderer to justice. Lynda La Plante continues to build a case for why her newest heroine, Anna Travis, will endear herself to readers through her vigilance, tenacity, and poignant vulnerability.

1. How does the murder case earn the moniker the Red Dahlia? When does the significance of this name begin to have an impact on Anna and James’s investigation and what are some of the initial results?

2. What was some of the evidence withheld from the press to facilitate the police’s search for the killer? How does Anna’s goof prove beneficial to the case in the long run?

3. What differences and similarities emerge in Anna and James’s approach to the case? How do their distinctive styles both hinder and aid the investigation over the long haul? What, if any, role does intuition play for either detective in the case?

4. Provide key examples of how seemingly insignificant details from the detectives’ interviews or casual observations become vital discoveries in the murder investigation. What do these instances reveal about the nature of police work?

5. What is the moral world embodied by the characters in the novel? Do Anna and James manage to stay above the fray? Why or why not?

6. Do you believe that the surviving Wickenhams have seen an end to violence in their lives? If yes, why? If not, why not? Do you think La Plante would agree with your assessment? Explain your reasons.

There are a number of key theories about the possible murderer of Elizabeth Short, the Black Dahlia. Using the novel Red Dahlia as your starting point, ask members of your book club to find three of these theories about the killer of Elizabeth Short; theories may be taken directly from the Red Dahlia or your own research. Divide the book club members into three groups to investigate each of the theories in detail. You may begin your exploration with the following websites:

At your book club meeting, a member from each of the groups should present the group’s theory to the book club. Each group should be sure to include:

• The basic outlines of the relevant theory

• Key evidence to support their theory

• Why their theory continues to resonate

• Why the Black Dahlia captures the public’s imagination

Lynda talks about The Red Dhalia