Listening to the Dead 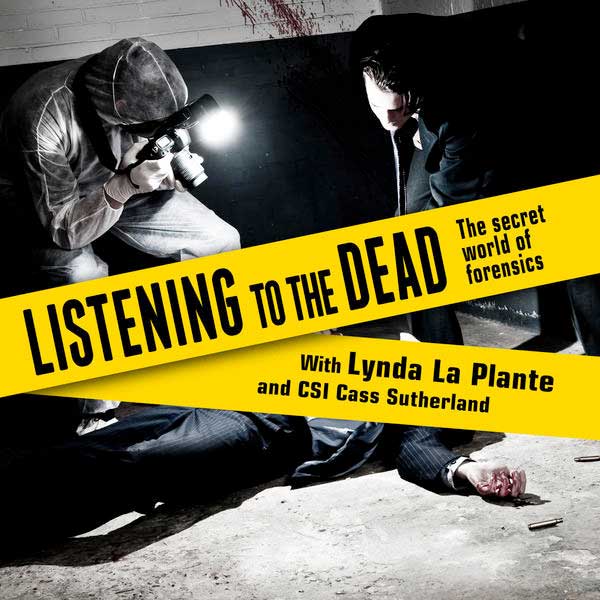 The secret world of forensics

As you know, I’ve always been fascinated by criminality and the people that solve crime. My books feature authentic depictions of crime scenes and police procedures – something I achieve through meticulous research with my colleague CSI Cass Sutherland.

Last year we launched our Listening to the Dead podcast and the 2nd season was launched in February this year.

The first series, which focussed on forensic science was an Apple Podcast bestseller.

The 2nd series looks at how investigators approach different causes of death – from blunt force to poisoning – with a focus on the methods used in the Prime Suspect and Tennison series.

You’ll be able to subscribe and hear us investigate various branches of forensics, discussing our own experiences, talking with experts, hearing how real-life crime scenes are worked, exploring the latest innovations and demonstrating how CSI fact is even more thrilling than CSI fiction.

You can find out how to subscribe at the following links and view an episode guide to both seasons below .

I hope you enjoy listening to us as much as we enjoyed making it.

Click the links below to view the episode guides

Lynda and Cass explore the world of forensic botany and ecology with leading expert Professor Patricia Wiltshire whose evidence helped to solve the infamous Soham murders.
Patricia Wilshire’s new book Traces – The Memoir of the forensic scientist is out now in audiobook, ebook and paperback.

Dr Peter Smith joins Lynda and Cass to talk about how DNA took over from blood pattern analysis as a crucial crime scene tool.

What can a fly on the wall yet us about a crime scene? It can tell Dr Martin Hall a lot as Lynda and Cass discover in this episode exploring the fascinating world of forensic entomology.
Read more here: https://www.nhm.ac.uk/our-science/departments-and-staff/staff-directory/martin-hall.html

One of the fastest evolving forensic disciplines, this science of extracting evidence from phones and laptops has become a central part of police investigations. Lynda and Cass are joined by industry expert Dr Jan Collie.
http://www.discoveryforensics.co.uk/people.htm

Perhaps to most well-known of all the forensic sciences, pathologists have been portrayed in books and films for years. But what is the real-life experience of a pathologist like and what can they really tell from a body at the scene and in the mortuary? Lynda and Cass are joined by Dr Stuart Hamilton to find out.
You can read more about Dr Stuart Hamilton and his work at the East Midlands Forensic Pathology Unit at the University of Leicester here: https://www.forensic-access.co.uk/our-people/expert-witnesses/dr-stuart-hamilton/

In this bonus episode, Lynda and Cass are joined by former President of the Chartered Society of Forensic Sciences, Dr Ann Priston. A leading expert in fibres analysis, Dr Priston visits Lynda at her home for a group discussion on this fascinating science.
Dr Priston is currently working with the charity Inside Justice, investigating alleged miscarriages of justice. You can learn more about their work here:
https://www.insidejustice.co.uk/about-inside-justice/advisory-panel.php

The Listening to the Dead team are back for a new season looking at causes of death and the investigative techniques that surround them.

This episode we welcome back pathologist Dr Stuart Hamilton to discuss his experiences in investigating blunt force homicide.

Three of the six causes of death in the board game Cluedo are blunt force trauma – which nicely sums up the prevalence of this cause of death. It’s the second most common form of homicide in the UK. But it’s also one of the most difficult to investigate – what weapon was used, which blow actually killed the victim?

Season 2 Episode 2: Cause of Death – Terrorism and Mass Disaster

From terrorist attacks to war zones, from earthquakes to floods, mass disasters are some of the most difficult and harrowing cases for police and forensic teams to investigate. Whether it’s identifying body parts or tracing a bomb factory from a tiny fragment of a device, the clues are often miniscule and highly disturbing.

In this episode, the team are joined by former anti-terrorism branch and SO13 officer David Alexander as he discusses his extraordinary experiences working on IRA bombings, the 7/7 bombings and investigating war crimes in Kosovo.

There is little debate in the UK on the subject of gun control: the general public consensus is firmly in favour of enforcing strict legislation on the ownership of handguns. Despite these strong sentiments, gun crime persists in the UK and handguns specifically are most commonly used in firearm offences in the UK. Gone are the days where guns were predominantly a scare tactic during robberies.

In this episode the team are joined by Former Senior Forensic Scientist specialising in Firearms and Wound Ballistics and an internationally-renowned expert in the field, David Pryor. As the ballistics expert called to the scene of the shooting of Jill Dando, David’s analysis and subsequent evidence was critical to the case. In the episode he joins the Listening to the Dead team to discuss his memories of those frantic days and his years of experience in identifying ballistics evidence.

Season 2 Episode 4: Cause of Death – Strangulation

Strangulation is one of the most common causes of death for women in cases of domestic homicides in the UK. Traditionally considered to be a crime of passion, it’s also the method of murder often used by serial killers.

In this episode the team are joined by pathologist Dr Brett Lockyer, part of the experienced team at Forensic Access (www.forensic-access.co.uk) as he reveals how to tell the difference between markings in a strangulation and a hanging and discusses the infamous Sussex Strangler.

Season 2 Episode 5: Cause of Death – Poisoning

A rarely seen cause of death today (outside of state-sponsored assassination) all the more fascinating for that. A favourite of authors for generations, poisoning has appeared in some of the most famous fictional and historic cases of murder. The team will be joined by a toxicologist to discuss the past, present and future of poison investigations – including the Teacup Poisoner Graham Young and the use of modern toxins in political assassinations.

Season 2 Episode 6: Cause of Death – Unknown

In 15% of homicide cases involving a female victim, the cause of death is unknown. Despite the huge advances in post-mortem sciences, pathologists are still faced with cases of suspicious death where the cause of death cannot be conclusively proved.

In this episode the team talk to a former member of the Thames River police and Hon. Curator of the Thames Police Museum (thamespolicemuseum.org.uk) Robert Jeffries who worked on many cases where the cause of death remained unknown. They are also joined by Professor Angela Gallop, a leading expert in investigating cold cases.

Cass Sutherland is a former detective sergeant in the Metropolitan Police London who retired after 30 years’ service. Cass is also a former Vice President and Honorary Fellow of the UK Chartered Society of Forensic Sciences.

Since retiring Cass has worked with Lynda La Plante as crime drama advisor for her TV productions and books. He has also advised extensively on scripts, and on set, for television dramas made for ITV, BBC, Channel 4 and various film companies.

If you would like to get in touch with Cass, then you can contact him at: cass@laplanteglobal.com